“The most difficult subjects can be explained to the most slow-witted man if he has not formed any idea of them already; but the simplest thing cannot be made clear to the most intelligent man if he is firmly persuaded that he knows already, without a shadow of a doubt, what is laid before him.” -Leo Tolstoy

Despite mounds of evidence that neither the average retail investor nor professional can pinpoint market peaks and troughs with any degree of accuracy, many still waste brainpower on this very activity. Why? It could be that the evidence is not widely known, or possibly that one might think they’re the exception to such data.

Charlie Bilello of Compound Capital Advisors recently shared the S&P 500 has recorded 49 new all-time highs for the year, as of 08/20/2021. 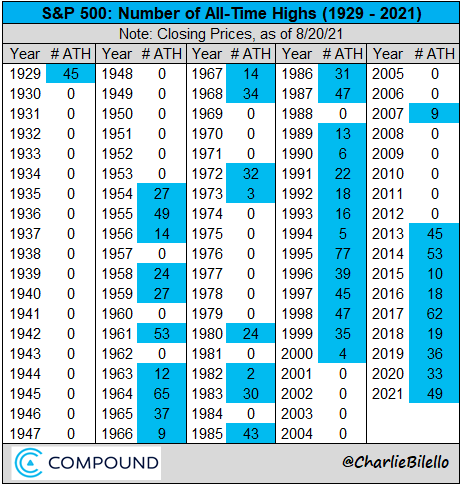 What’s interesting about this data is how lumpy the historical returns are. From 1930 – 1953, we failed to reach a single all-time high and more recently only 9 new all-time highs were recorded from 2001 – 2012. Now we have seen over 325 new all-time highs since 2013. While that is quite a phenomenal stretch, I have encountered countless nervous investors that entire ride up who were always afraid the party was about to end. The common perception was that all-time highs signal an impending crash. If only market forecasting were that easy….

Historically it’s been better to invest at an all-time high than any other random day in the market.

If one says stocks are overvalued or undervalued it implies the price is wrong, thus it should “correct” at some point. It would take quite an ego to suggest you know the fair value better than the collective wisdom of millions of market participants. But this is a daily activity for guests on CNBC.

Go to Google and type in “stocks are overvalued” then change the date range of the search to any year you want, and you can find many results between 2013-2021 stating such things. Here’s one I found quickly from that exercise:

If we look at stocks through the lens of the S&P 500 Index, then valuations certainly are higher today than in recent history and it’s for good reason. Earnings expectations are through the roof. I pulled this chart from JP Morgan’s Guide to the Markets Summary (as of 09/09/2021):

Now what if I told you that despite hitting 49 all-time highs this year, the S&P 500 index has actually gotten cheaper? You’d think I’m nuts, but that’s exactly what has happened. Earnings multiples have contracted over 6% for the year.

Market prices converge on what participants believe is a fair value. How can we argue that stocks are overvalued when JPEGs of pet rocks are selling for $600,000+?

Imagine you walk up to a yard sale and you find a mint condition Babe Ruth rookie card. The best part is the owner is only asking $1 for the card, as they are unaware of its value. Just as you are about to hand over your dollar, another person walks up and offers $50. You now up your offer to $100. A third person shows up and blurts out “$500!!!”.

How many people would have to show up until the card is sold for an amount closer to its fair value? Not as many as one might initially think, and now realize that millions of people are setting stock prices each and every day. What are the chances of consistently exploiting market mispricings?

Despite the S&P 500 index being one of the most widely tracked indexes in the world, it’s usually not a fair representation of how an individual investor’s portfolio will look. At Meredith Wealth Planning we implement strategies that are more diversified amongst styles and countries. For instance, the MSCI World Ex-US Index (an index that tracks non-US stocks) currently trades at a 29.6% valuation discount to the S&P 500 which is the largest discount this century.

Cheap is cheap for a reason, and one must pay up for companies that are expected to grow rapidly. This leads into the value versus growth style debate.

In this 2017 article by Jack Vogel of Alpha Architect, it is shown that in US stocks historically there have been more extreme winners in value stocks and more extreme losers in growth stocks. They show the buy and hold (B&H) return of these styles over different 10 year periods.

Buying a cheap stock does not ensure you’ll capture any expected value premium. There is too much company specific risk. Buying a large group of cheap stocks through a low cost ETF or mutual fund will improve your odds of doing so.

Currently the valuation spread between growth and value stocks is very high, which in the past has preceded an above average premium return for value stocks.

Again, there are no free lunches here. Small cap value stocks trade at much lower valuations since the outlook is less optimistic. At this point it would appear that Amazon, Apple, Facebook, Microsoft, Tesla and the gang will own the world one day. The main argument to avoid tilting towards value and small cap value would be that “it’s different this time”.

“Earnings have grown for large growth stocks. By our estimation, earnings grew by approximately 194% between January 2010 and July 2021. However, the price increase advanced even more, growing by 492% over that same period.

By way of comparison, small value stocks’ earnings increased by 177% between January 2010 and July 2021, but the price return was in line with the earnings growth at 181% over that same period.”

The price of large growth stocks has dramatically outperformed their earnings growth. A good example of this would be Apple. If Apple traded at its September 2019 trailing 12 PE Ratio, its price would be about 37% lower today.

Some stocks are very highly priced, others are not so highly priced. Historically it has been a good move to tilt towards value and globally diversify, and I suspect that will be the case going forward. While it can be tempting to chase returns and believe that this time it’s different, it probably won’t work out well if you do.

Disclosure: Past performance does not predict future results. This article is for informational purposes only and should not be considered a recommendation. Information contained in this article is obtained from third party resources that Meredith Wealth Planning deems to be reliable. Any reference to a market index is included for illustrative purposes only, as it is not possible to directly invest in an index. Indices are unmanaged, hypothetical vehicles that serve as market indicators and do not account for the deduction of management fees or transaction costs generally associated with investable products, which otherwise have the effect of reducing the performance of an actual investment portfolio.